Shah Rukh Khan and Gauri Khan’s daughter, Suhana Khan, turned 22 today (May 22). On the occasion of her birthday, Gauri, Karan Johar, Ananya Panday and others extended good wishes to Suhana on her special day. While Suhana continues to get love from her close ones, the star kid has now given a glimpse of her 22nd birthday bash. Suhana Khan shared photos from her birthday on her Instagram stories.

Taking to her Instagram stories, Suhana Khan shared a photo of a two-tire chocolate cake. The Archies actress further posted a picture of her room’s ceiling filled with balloons. Without giving away much in the caption, the actress let her photos do all the talking about the special day.

Check out the photos below: 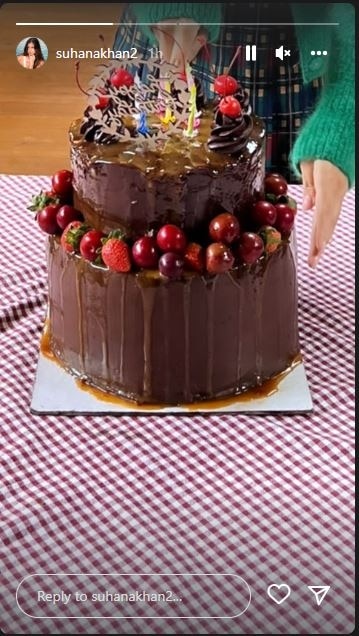 SUHANA KHAN TO MAKE HER DEBUT

SRK’s daughter, Suhana Khan, is all set to make her acting debut with Zoya Akhtar’s project, The Archies. Also featuring Agastya Nanda and Khushi Kapoor, The Archies will be released in 2023 on Netflix. After Suhana shared the announcement on social media, her father SRK penned a long note for her.

“And remember @suhanakhan2 you are never going to be perfect.but being yourself is the closest to that. Be kind and giving as an actor.the brickbats and applause is not yours to keep.the part of you that gets left behind on screen will always belong to you.u have come a long way baby.but the road to peoples heart is unending..stride forth and make as many smile as you can. Now let there be Light.Camera and Action! Signed Another Actor (sic),” wrote Shah Rukh Khan.

Meanwhile, we wish a very happy birthday to Suhana Khan!