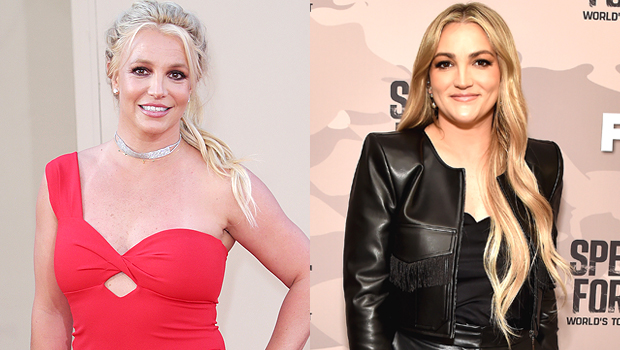 Britney Spears didn’t hold back when it came to her reaction about sister Jamie Lynn Spears‘s comments about being her younger sister. “Are we gonna say it was hard being my sister ???? Hmmmmmmmmmmm …. really ???” Britney, 41, began her Instagram caption with sarcasm. The “Toxic” singer went on to recall the difficult years of her strict conservatorship, where her dad Jamie Spears controlled her finances and seeming basic freedoms, such as being able to go out for dinner with friends or drink alcohol during her Las Vegas residency and beyond.

“It honestly blows my mind the hardships you say you have had with having me as your sister …” she wrote in a later part of the message. “I’m sorry you feel that way but don’t ever poke at my broken foot in a kitchen telling me to go to the doctor because my foot infection might infect your royal children !!!” she wrapped the note, which was written alongside images of spinal injuries.

Britney has previously accused her younger sister in being complicit in the legal arrangement. “We teach her the MEANING OF MEAN and then throw her away in the end with no self rights !!!! You want me to share it on Telly ???” Britney also wrote earlier in the same post. “I’d rather spit in their faces and trash them on Instagram cause that’s all my family has ever been to me !!!!” the Grammy winner added. Britney finally earned her freedom back after Judge Brenda J. Penny terminated the 14 year long agreement in Nov. 2021. Since, Britney tied the knot with longtime boyfriend Sam Asghari.

“Not a victim story or crying about it because I was never a big deal … I sat in a chair for 10 hours a day and no rights for 4 months !!!” Britney went on in the lengthy message, most of which seemed directed at Jamie Lynn, 31, directly.  “[My family] hurt me and nothing was done except that I lost 15 years of my life with my family owning my name … subjected to being an angel while my dad has 5 women on his tour bus drinking that cup of coffee … so cool and smooth it must have been nice owning my name for 15 years …”

Jamie Lynn, best known for her role on Zoey 101, made made the initial comments about Britney on her new reality series Special Forces. “It just feels like every time I work really hard to get something on my own. It’s like it’s not really worth it,” she said on the competition based show. “I mean, growing up, my sister [Britney Spears] became famous, worldwide famous when I was very young… I’m proud of her, love her to death. And I don’t know I feel like sometimes I’ve never been able to really have anything for myself,” she explained.

The mom-of-two added that she’s “extremely proud of my sister but also have my own identity and be expected to be seen as my own person. I struggle with self-esteem all the time. And as a parent, you really want to fake it because you don’t want to ever see your children feel the feelings you feel. The hardest thing is being away from my kids, but I’m here to do something to make them proud.”

Britney Spears & Justin Timberlake’s Dating Timeline: From The ‘Mickey Mouse Club’ To Their Breakup & Through Today