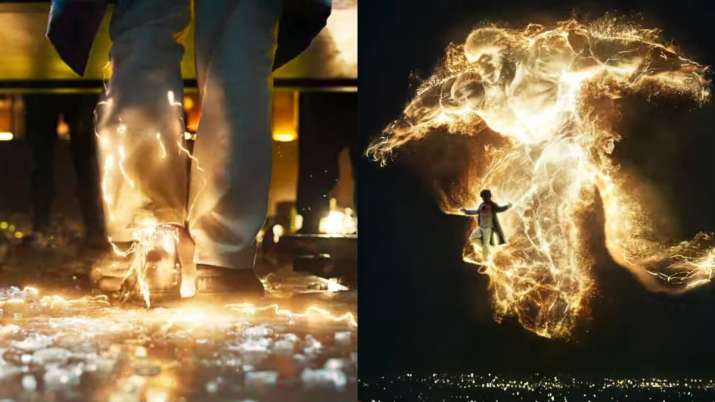 Brahmastra: On Wednesday, fans witnessed the release of the much-awaited trailer of Ayan Mukerji’s directorial film. Starring Ranbir Kapoor, Alia Bhatt, Amitabh Bachchan, Nagarjuna and Mouni Roy, the trilogy has been in the discussion ever since its inception. Well, not only this but another reason why it has grabbed everyone’s eyeballs is because of a special cameo. It was announced a long time back, that Shah Rukh Khan will be having a cameo in the much-awaited fantasy drama ‘Brahmastra’, and now when the trailer is out, fans are assuming that the mysterious guy holding up the trident is none other than King Khan himself. A clear glimpse of SRK was missing from the majestical trailer, but fans are convinced that the person with fire around him, holding the trident and the supernatural lightning image of Lord Hanuman behind him is the megastar himself.

Meanwhile, previously, a report in Pinkvilla stated, “Brahmastra is designed in such a way that each of these actors play a key role in the narrative. Ranbir’s character meets each of them at different times of his quest to find the Brahmastra. While Nagarjuna plays an archaeologist, SRK essays the role of a scientist. Nagarjuna, Shah Rukh and Dimple Kapadia are all aids to Ranbir’s character at specific points in the plot and push the story ahead. All of them have clues leading Ranbir to the Brahmastra. In fact, the film opens with Shah Rukh’s sequence. It’s a long scene and SRK shot it over ten days at Film City earlier this year.”

By the time the ‘Brahmastra’ trailer was out, it gathered a lot of appreciation from the fans and the B-town. The magical drama film is very high on VFX and action and promises an amazing big-screen experience to the audience.

‘Brahmastra’ is a trilogy and the first part is titled ‘Brahmastra Part One: Shiva’ fans are now eagerly waiting to experience this epic multi-starrer fantasy film on the big screen. The film is all set to hit the theatres on September 9, 2022, in 2D and 3D.

Meanwhile, Shah Rukh Khan was last seen in 2018 in the film ‘Zero’, which post that fans are waiting to see their favourite star back on the big screen. The actor is carrying a bucket full of movies with ‘Pathan’, ‘Dunki’ and ‘Jawan’ in his kitty.