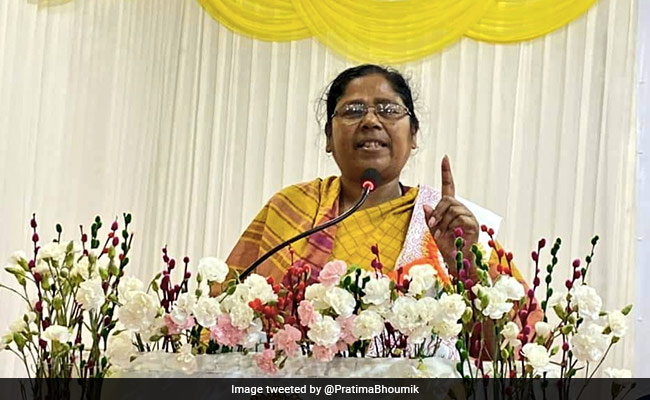 Pratima Bhoumik is a Minister of State for Social Justice and Empowerment. (File)

“Even if we call 10 times, ministers in West Bengal do not pick the calls…That is the situation,” Union minister Pratima Bhoumik said in Lok Sabha while replying to queries on the implementation of a central government scheme in the state.

While raising a supplementary query during Question Hour on Tuesday, Congress leader Adhir Ranjan Chowdhury said it has become a habit in West Bengal of not taking calls and not listening to us, as he took a swipe at the ruling Trinamool Congress in the state.

There were loud protests in the House by Trinamool Congress members against the remarks by the minister and Mr Chowdhury.

BJP member from West Bengal S S Ahluwalia raised supplementary questions related to the implementation of PM-DAKSH scheme in the state and asked whether the minister would talk to the officials concerned to sort out the issues.

Ms Bhoumik, a Minister of State for Social Justice and Empowerment, said, “Even if we call ministers in West Bengal 10 times, the ministers do not pick the calls.” And those who are with the ministers also are scared to share the ministers’ mobile numbers. This is the situation, she said as members in the Treasury benches shouted at the Trinamool counterparts.

Mr Chowdhury urged the minister to help develop Murshidabad and said that it has become a habit for people in West Bengal to not attend to calls and “not listen to us”.

The leader of Congress in the House represents Berhampore constituency in West Bengal.

In response, Ms Bhoumik said that for the past one year since she became a minister, she has been trying to distribute appliances worth Rs 12 crore to the differentially-abled and senior citizens in the district but has not been successful.

An assessment has been done for 16,000 people and “we are ready to give the appliances but we are not getting help”.

The BJP is locked in a bitter political battle with the Trinamool. The Congress is also at loggerheads with the ruling party in West Bengal.