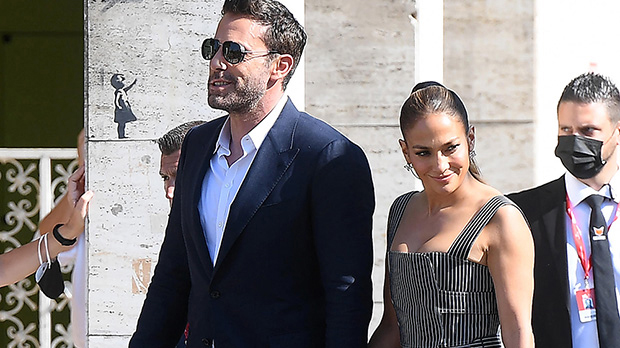 The honeymoon never seems to end for Ben Affleck, 50, and Jennifer Lopez, 53, who were spotted having a great time as they strolled through boutiques in Milan! In photos, which you can SEE HERE, the happy newlyweds were photographed in the luxury shops with their arms around each other, Ben rocking a casual button-down shirt and jeans, and Jennifer wearing a bridal white crop tank and matching pants. She topped off the look with a brand-new white fedora picked up during the outing, and layered necklaces.

Left to his own devices, Ben appeared to feel the urge to get a hat of his own and was snapped trying on a beige beret as he looked on with an impish expression. The duo has every reason to feel playful — they just headed back to Italy following their stunningly lavish second wedding ceremony at Ben’s Georgia estate on August 20.

The star-studded event included guests like Jersey Girl director Kevin Smith, who didn’t hold back when recalling the beautiful ceremony. “I was crying like an old woman at a wedding… like my mother at a wedding,” Kevin admitted to Extra TV following the big event, on Aug. 24. “Honestly, like, one of the most romantic moments I’ve engaged with in my life, and it wasn’t even my romantic moment,” he said of the wedding, which was officiated by J. Lo pal Jay Shetty.

Jersey Girl, you’ll recall, was the 2004 film Ben and Jennifer appeared in together before they famously broke up, only to reunite nearly two decades later in 2021. Bennifer 2.0 were initially married in Las Vegas in a surprise legal ceremony on July 16. “When love is real, the only thing that matters in marriage is one another and the promise we make to love, care, understand, be patient, loving and good to one another,” the bride wrote via her newsletter following the Las Vegas nuptials.

“Stick around long enough and maybe you’ll find the best moment of your life in a drive-through in Las Vegas at twelve-thirty in the morning in the tunnel of love drive-through, with your kids and the one you’ll spend forever with,” she wrote. “Love is a great thing, maybe the best of things-and worth waiting for.”