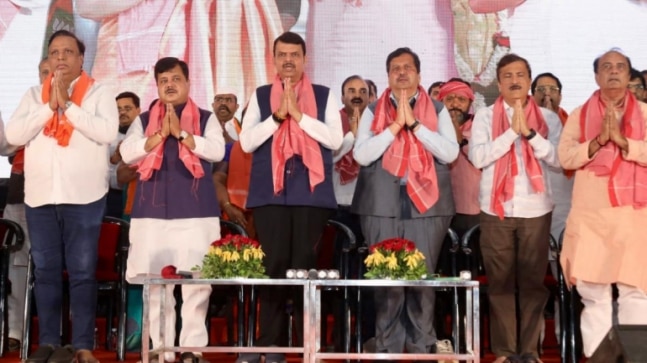 A day after Maharashtra Chief Minister Uddhav Thackeray addressed a massive rally in Mumbai, the state’s former CM and BJP leader Devendra Fadnavis took to the stage to do the same. Referring to the Mahabharata, he said Sunday’s rally was the ‘Pandavas’ sabha’ while Shiv Sena’s programme on Saturday was the ‘Kauravas’ sabha’.

Last month, Independent MP Navneet Rana and her MLA husband Ravi were arrested in Mumbai after they threatened to recite the Hanuman Chalisa outside Uddhav Thackeray’s home.

Meanwhile, AIMIM MLA Akbaruddin Owaisi sparked a row after he visited the tomb of Mughal ruler Aurangzeb at Khuldabad in Maharashtra’s Aurangabad. Leaders from both the BJP and Shiv Sena slammed him over the same.

“Aurangzeb murdered Sambhaji [Maratha king] and Owaisi went to such a tomb. Even a dog would not pee at Aurangzeb’s tomb,” Fadnavis said on Sunday.

The BJP and Shiv Sena have been competing for the title of the ‘real Hindutva’ party in Maharashtra.

In the same vein, Devendra Fadnavis said on Sunday, “Balasaheb was a tiger but today, there is only one tiger and it is Narendra Modi. Modi is the real Hindu.”

He added, “Your [Shiv Sena] Hindutva is gadha-dhari [of a donkey’s]. You [Uddhav] said you kicked us out. But only a donkey kicks.”

Taking his attack on Uddhav Thackeray further, Fadnavis emphasised that he was not born with a silver spoon in his mouth.

“I have done politics on ground, not five-star politics… Only when the king comes out of his palace will he understand the pain of poor people. During Covid, I was live on ground while he [Uddhav] was live on Facebook,” Fadnavis said.