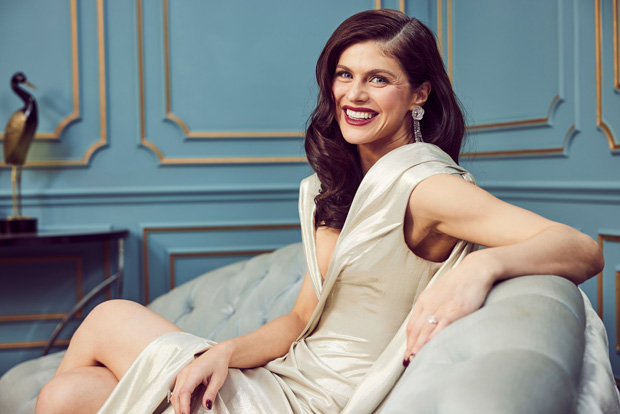 Alexandra Daddario and Andrew Form are married! The lovebirds, who got engaged in Aug. 2021, shared their exclusive wedding photos with Vogue, which you can see here. Alexandra looked gorgeous at the “laid back” nuptials, wearing a Danielle Frankel gown. The dress had flowers embroidered throughout, as did her long and stunning veil. Meanwhile, Andrew wore a white, striped suit for the ceremony.

The two look blissfully happy in their wedding photos. Alexandra’s hair was pulled back into an intricate updo, with diamond bracelets and red lipstick adding some flair to her wedding day look. They posed in various locations before heading to the venue, which appeared to have a low-key, rustic vibe. “I was so nervous, I didn’t even notice the incredible flowers until I saw the photos,” Alexandra admitted.

In the Vogue profile, Alexandra also shared more about her relationship with Andrew, which began in 2020. The two actually met on the streets of New York City. She was staying in town while waiting to be approved by a co-op, and he was in the Big Apple waiting for a connecting flight. Since it was the midst of COVID-19, the normally busy street was quite empty, and they struck up a conversation, during which he asked her to dinner.

The White Lotus star revealed that she and Andrew first agreed to marry each other in April 2021, although he didn’t propose until August. They chose New Orleans for their wedding after Alexandra recalled attending “the most amazing” wedding for two of her friends there. “It’s a city full of music and life!” she gushed.

Althoguh Alexandra and Andrew have been engaged since August 2021, news of their pending nuptials didn’t break until December. The two have been mostly low-key throughout their relationship, although she first confirmed they were dating with a May 2021 Instagram post. Andrew was previously married to Jordana Brewster, who he has two kids with. They split in 2020.