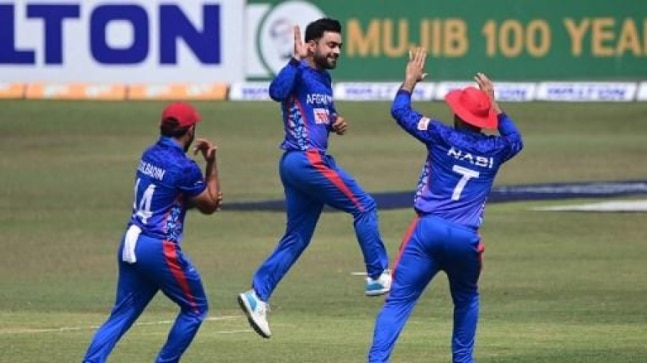 Afghanistan jumped to the 2nd spot of the ICC World Cup Super League after completing a 3-0 sweep of Zimbabwe in a 3-match ODI series in Harare on Thursday.

Afghanistan inched closer towards automatic qualification for the 2023 Cricket World Cup in India after completing a clean sweep of Zimbabwe in a 3-match ODI series in Harare on Friday, June 9. The Asian nation moved to the 2nd spot in the 13-team ICC World Cup Super League with 10 wins in 12 matches.

In a low-scoring encounter, Zimbabwe were bundled out for just 135 in 44.5 overs by Afghanistan who won the toss and opted to bowl. Afghanistan rode on Rashid Khan’s miserly spell as the star leg-spinner finished with figures of 3/31. Young pacer Fazalhaq Farooqi picked up 2/25 while Mohammad Nabi chipped in with 2 wickets.

Sikander Raza top-scored for Zimbabwe with 38 but there was no other considerable contribution from the rest of the batting order.

In reply, Afghanistan slipped to 39/3 but they recovered well gun down the target in 37.4 overs and complete the 3-0 sweep. Captain Hashmatullah Shahidi top-scored for Afghanistan with 38 while Nabi remained unbeaten on 34.

“It would be a huge tournament for us to play in 2023, for the team and for me personally,” player of the series Rahmat Shah told reporters. “I have lots of plans to play good cricket in the World Cup with a positive mind.”

In the ICC World Cup Super League, each team earns 10 points for a win, five for a tie/ no result/ abandoned match, and zero for a loss. Afghanistan had headed into the series on the 5th spot but jumped to the 2nd spot following the 3-0 win.

Afghanistan and Zimbabwe will next meet in a 3-match T20I series from June 11 in Harare.