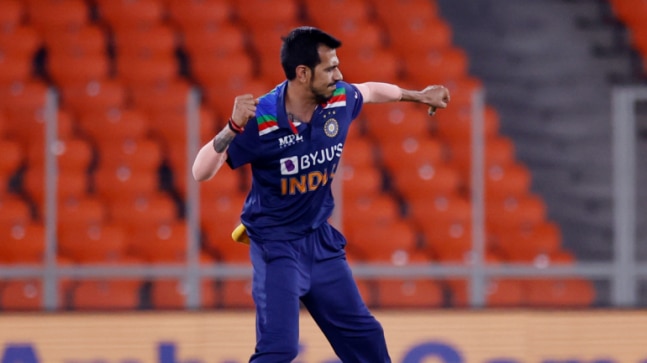 Yuzvendra Chahal became the leading wicket-taker in the Indian Premier League (IPL) 2022 after he picked up 27 wickets from 17 matches.

Former batter Aakash Chopra reckoned that Yuzvendra Chahal is the very best among the current bunch of cricketers when it comes to classical leg-spin bowling. The 31-year-old has been an integral part of the Indian limited-overs setup ever since he made his debut way back in 2016.

The tweaker recently won the Purple Cap in the Indian Premier League (IPL) 2022 after he picked up 27 wickets from 17 matches. The veteran also notched a five-wicket haul for the Rajasthan Royals (RR) in their match against Shreyas Iyer’s Kolkata Knight Riders (KKR).

Chopra heaped praise on the Haryana-born Chahal for his guile and trajectory, making it tough for batters to play him efficiently.

“Yuzvendra Chahal is an amazing bowler. He bowls differently from everyone else. Generally, all leg-spinners doing well in T20s bowl more googlies and fewer leg-spinners and try to finish the ball within the three stumps. He (Chahal) varies his line so beautifully that you feel that the guy is a Grandmaster,” Chopra was quoted as saying on his official YouTube channel.

Chopra mentioned that Chahal gets a lot of purchase from the surface when he bowls on the stumps. “If the ball pitches within the three stumps, it is in my arc and I can play a shot very easily, but if it pitches outside the leg stump, it becomes difficult to play a shot.

“When he (Chahal) bowls on the stumps, he turns the ball a lot, so that you cannot hit him straight. Else he goes even further outside off stump,” Chopra added.

After plying his trade for Sanju Samson’s Royals in the IPL, Chahal is set to play for the Men in Blue in their upcoming T20I series against South Africa. The opening game is set to take place on Thursday, June 9 at the Arun Jaitley Stadium in New Delhi.