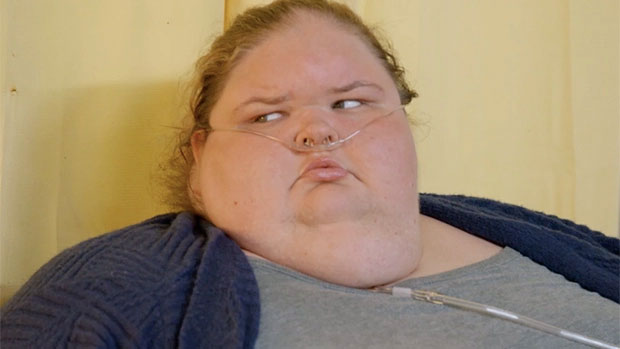 Tammy Slaton‘s health took a turn for the worse during a teaser for the upcoming fourth season of the hit TLC series, 1000-lb. Sisters, obtained by PEOPLE. The trailer started off with Tammy, 36, announcing that she plans to go to rehab. The next clip showed an ambulance sitting outside a hospital with the lights on and sirens blaring. “Tammy quit breathing”, the voice of a worried family member said before her sister, Amy Slaton,  added, “Her body shut down.”

Next, the trailer showed Tammy in a chipper mood after receiving a tracheotomy to help her with her breathing. “I’m still here, b—s!” she smiled. Amy announced in a since-deleted TikTok that the tracheotomy was for carbon dioxide poisoning, and not her weight, per Soap Dirt.

The trailer then followed Tammy’s ongoing struggle with her weight, and at one point, even showed her getting rejected by Dr. Eric Smith after she told him she’d like to be approved for bariatric surgery. “I told you Tammy, you have real risks,” he replied. Speaking out of concern, her bother, Chris, who was there for the appointment, added, “If she doesn’t get the surgery, she’s gonna die because of her weight.”

The trailer ended with footage of Tammy being loaded into an ambulance as her oxygen dropped. A voiceover of an emotional Amy expressed her worry that Tammy is “gonna end up dead.”

Aside from following her scary health situations, the trailer also showed a glimpse of Tammy falling in love at rehab. Her family was not shy to express their disapproval, with Amy saying she’s worried her sister will “go back into her old ways” if she gets into another “bad” relationship. Meanwhile, another family member questioned the rush of the relationship. “I have a lot of concerns. Why rush into anything?” she asked.

Meanwhile, the trailer followed Amy’s road to motherhood once again, as she was expecting her second child with her husband, Michael Halterman. Although she underwent weight loss surgery in 2019 and successfully dropped more than 125 pounds, her health was still a concern as she carried her second child. “The doctor has concerns with this baby, because I’m still morbidly obese,” she said to the camera. She was also filmed in the hospital telling the TLC crew that “things took a turn for the worse.”

New James Bond: 7 Actors In The Running To Play The Next 007